In my ever-expanding effort to connect global education and local communities, I find the issue of immigration one I am currently quite interested in. First, because we owe it to ourselves to remember that the only non-immigrants are the native peoples who were on this land centuries before we came; all other families came from somewhere outside our borders. The United States of America was created by immigrants, coming in waves for over two hundred years. Recently, I had the opportunity to dive more deeply into the issue and learn about many different aspects of it, and I am quite inspired by what I found. 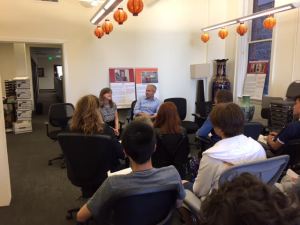 When Seattle made national news after an executive order called for a “Muslim ban” and our Attorney General filed a lawsuit calling it unconstitutional, flocks of lawyers flew to the airport to help those in danger of being detained or sent home because of the ban. One organization that has gotten involved and continued to work very hard since is the Northwest Immigrant Rights Project (NWIRP). NWIRP provides free legal services to those in need, challenges laws they find unconstitutional, and serves those who are protected under our laws but cannot afford attorneys. My associate Kaitlin and I visited their offices and were very impressed by what they do. We decided it would be great to create a course looking at a variety of aspects of immigration, similar to the one I participated in through Hawken School in Cleveland (to learn more about that experience, see my post about it here). After consulting a number of organizations and receiving a green light, we reached out to educators in the area to see if anyone wanted to collaborate with us. The Bush School expressed interest, and after a couple of months of co-creating a weeklong experiential course, the students and their two teachers are spending five days studying various aspects of immigration in Seattle and our state capital, Olympia. 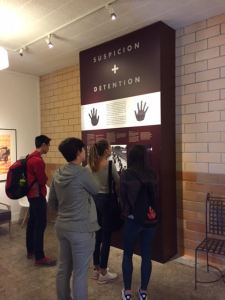 Yesterday was the downtown day, and four different organizations within walking distance of each other provided the learning structure. We started in the NWIRP offices, where students had the chance to meet the Executive Director, the Director of Development and Communications, and three staff attorneys to learn about how they handle cases. Then we moved on to the Seattle Detention Center, a facility used from 1930 to 2004 to detain immigrants and refugees seeking asylum and assistance (the current center is in nearby Tacoma). The center now houses artist studios, but it still feels very much like a prison and has plaques denoting how different parts of it were used when people were detained there, including the third story yards where many wrote their names and countries in tar. After a self-guided exploration of the building, we walked to the Impact Hub for a meeting with a community liaison officer from Immigration and Customs Enforcement (ICE), who spoke to us about the role ICE plays in Homeland Security, and how to distinguish rumors from facts about “roundups” and deportations. Our final stop, after a delicious Dominican lunch, was the office of the American Civil Liberties Union (ACLU), to hear about the role they play vis a vis immigration — supporting protests, filing lawsuits, protecting the Bill of Rights, and educating the public.

It was a full and fascinating day, and I am inspired to continue the work. I would love for every high school student have a field trip like this, and I don’t see why they can’t. I plan to continue to reach out to educators in Seattle and help them create ways to learn more about immigration and how it affects our community. I want to hear about the rest of the Bush School week, and I already have a lot of ideas of other areas of immigration that would be great to explore.

Tell us: have you engaged your students in issues regarding immigrants and refugees? We would love to hear about it!