Each month, the Educator Journeys Series features a guest blog post written by one of our colleagues. They write about how they got into their work, lessons they’ve learned, and their innovative approaches to shaping the future of education. This week’s Educator Journey post is written by Ross Wehner. Ross is founder of World Leadership School and TabLab, both of which partner with K-12 schools to transform learning and create next-generation leaders.

Rather than talk about my background as an educator, I want to highlight a movement every educator should learn about and (hopefully) support: the Mastery Transcript Consortium (MTC), a fast-growing coalition of private schools that is prototyping a new college transcript based on mastery of skills, rather than mere content knowledge. I believe this movement will, over the next decade, create a powerful alternative to ABCD grades and help upend the tyrannical college admissions process. 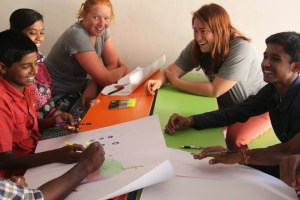 The college admissions process has long stymied innovation across the entire K-12 spectrum and created an unhealthy and stressful learning environment for students. College admissions officers need something quick and easy – like ABCD grades and SAT scores – in order to sift through hundreds of thousands of application. But grades, and SAT scores, measure only a thin band of what students and schools can do – and they stress out our kids in the process.

Vicki Weeks and I looked at the college admissions process five years ago when we helped start Global Circles, a coalition of global education organizations. After studying the problem for a year, I had to say the serenity prayer for my own health and sanity (“God grant me the serenity to accept the things I cannot change”). I realized that shifting the direction of all the colleges and universities in the United States, not to mention the College Board, would require a certain type of leader and movement. 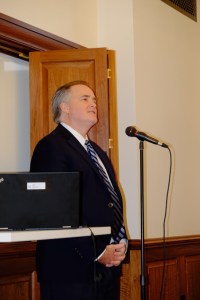 I heard that leader, Scott Looney, speak for the first time a few weeks ago and the movement is the Mastery Transcript Consortium. Looney is Head of Hawken School in Cleveland and he is the tenacious leader of the MTC movement, which now numbers 93 member schools — up from 66 just a mere two weeks ago! MTC’s goal was to reach 100 schools in the 2017-18 school year, but they will obviously exceed that goal. MTC is working only with independent schools but they eventually want to create a transcript used by the 37,000 high school in the United States – public, private, charter and parochial.

He and Doris Korda, Hawken’s Associate Head, have been touring the nation raising support for their idea. I heard them at the OESIS Conference in Los Angeles two weeks ago, at NAIS last week in Baltimore, and then talked with Scott this morning. World Leadership School is joining this consortium and will volunteer our time and expertise in whatever way we can to advance this important movement.

The new online transcript meets the litmus test of allowing an admissions officer to get a decent understanding of a student’s performance in two minutes or less. Under the Mastery Transcript students gain micro-credits (not grades) for a series of skills such as analytic and creative thinking, leadership and teamwork, global perspective, etc. It will allow college admission officers to see a more complete picture of a student’s strengths  — and without using any grades or numbers (the current idea, likely to change, is a sort of multi-colored spider web with featured credits listed at the side — see below ). Admissions officers can even click down into every skill the student has to see the standard, and then click down further to see the individual items of student work (videos, art work, writing) supporting that standard. 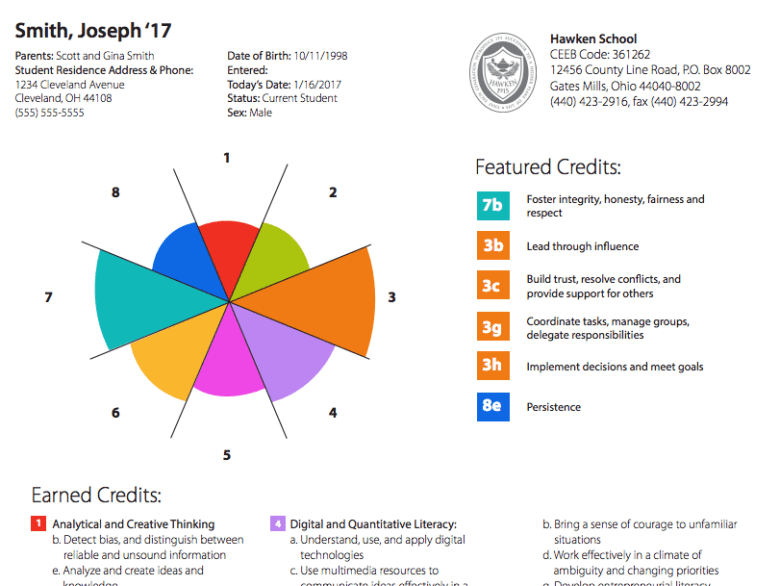 This transcript will be hosted in a yet-to-be-built technology platform that Looney estimates could cost between $4-$8 million. Some of this money will come from member dues, but most from private fundraising and grants. The Consortium is currently pursuing a $2 million grant from the E.E. Ford Foundation. Fingers crossed.

It’s an ambitious idea but I have a clear sense that this coalition will pull it off. It’s time. Our students are stressed out; teachers have inflated grades almost to the point where the grades are meaningless; schools are held back from innovating; and even college admissions officers admit the whole system is broken.

A few innovative schools have been experimenting for years with alternative assessments. What’s different about the Consortium is that Looney is a hard-knuckled realist who is assembling a coalition of schools which wield real clout in the college marketplace. Independent schools may only educate 1% of students in the US, but they provide 9% of all Ivy League students and 25% of the full-paying students in private colleges in the US, according to the MTC.

Looney plans to wield the coalition’s influence to become what he calls a “credible partner” to universities — in other words, the MTC will come up with a strong working prototype and then work to gain endorsements from leading universities. Once the key colleges and universities are on board, Looney thinks it will be easier for parents and students to try the new transcript. He envisions that most MTC members will at first allow families to choose between either the traditional or new mastery transcript. So schools will have a mixture of students being evaluated in two basic ways – some receiving grades, others receiving micro-credits. The process of switching completely to a mastery transcript may take 15 years or more, and some schools may never feel they need to make the switch entirely.

The college admissions process stymies innovation at our schools and it has long created a toxic environment for our students. “What we measure, we do,” remarked management consultant Peter Drucker. ABCD grades represent only a thin slice of a student, and a tiny slice of all that a school can do. While we have grades, students and schools will be forced to perform within that tiny, unfair slice. There is a much larger world of learning out there that the Mastery Transcript Consortium will help unlock. Let’s get this done. 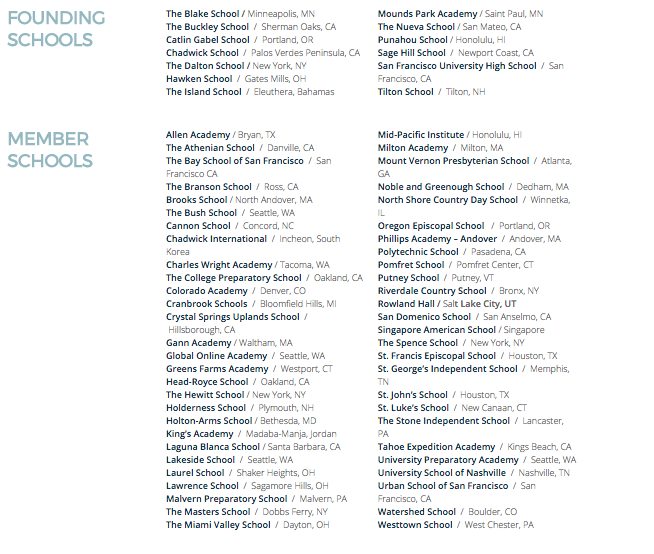